Before Sam Met The Shadow Watcher.... 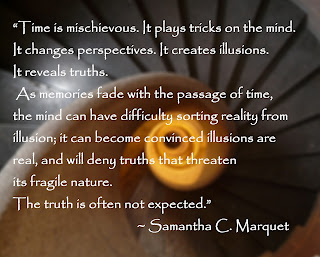 Monday marks ten years since the day Sam and her Shadow Watcher first met. For those who wish to join me, I'll be re-reading chapters from The Shadow Watcher and A Shadow in Doubt on their corresponding tenth anniversaries, and posting along the way.

To set the mood, I'm sharing the original Prologue from The Shadow Watcher, since it's since been taken out. It's some of Sam's backstory, and I wound up working most of it in to the first chapters instead. Still, it gives a hint of what her mindset was, before everything changes....

Time is mischievous. It plays tricks on the mind, it changes perspectives, it creates illusions, and it reveals truths. As memories fade with the passage of time, the mind can have difficulty sorting reality from illusion; it can become convinced illusions are real, and will deny truths that threaten its fragile nature. The truth is often not expected.

I have memories of being watched, going back before my teenage years. At first it was just a feeling, or an impression, there was someone outside my window. Sometimes I would get the courage to look, but I never saw more than shadows. Everyone told me I was imagining things - that I was crazy - and they almost had me convinced.

In the beginning, it was frightening - I was terrified. To make matters worse, I started hearing more news stories of young girls being kidnapped, either because it happened more frequently, or I was growing old enough to start paying attention.

After a month, or so, I convinced myself it was my father’s ghost, come back to watch over me. I know, it’s a silly notion, but it gave me comfort at the time. Within a couple of years, I grew out of that idea.

In high school, when I started wandering out into the world more on my own, there were times I would get a feeling someone was there. It was always the same presence. I would look up to see a shadow of movement under a tree, or next to a building, that couldn’t have been blamed on the wind.

Halfway through my first quarter of college, there was a tan van with dark brown stripes I noticed one night, parked outside the restaurant where I worked. The next night, it was parked right next to my car. I left with a friend, and came back for the car in the morning.

The next week, it followed me home. Some days, I would see it parked across the street in the morning when I left. It would be in the parking lot at the library at school. Weeks went by, and eventually I saw it everywhere I went.

My boyfriend at the time had moved into his own apartment, and I was able to ditch the van on my way over there. I moved in, briefly, when winter break started, and after that my schedule at school changed. After I transferred to another location with the restaurant chain, I stopped seeing the van altogether. When I moved back home, it never surfaced again. But the feeling that I was being watched, the long familiar presence, remained.

At some point, a man in a trench coat began appearing at strange times. One night, driving home from a friend’s house, I saw him walking, and drove past, only to encounter another man of the same height, hair length and color, wearing the same trench coat, walking the same direction, again, three blocks further down the road. I would have written it off as a coincidence, except that it happened again, twice more.

These sightings fluctuated in frequency of occurrence, until the early part of 2006. It was right around my twenty-seventh birthday I noticed not having the feeling of being watched for the first time. I felt the absence of the presence to which I’d grown accustomed. Then, I started dating someone new, and I didn’t think about it at all for a while. In a strange way, subconsciously, I think I missed it. 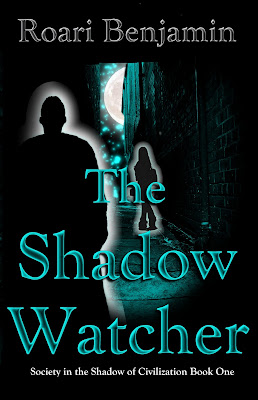 If you haven't downloaded your copy of The Shadow Watcher yet, it's free! Just follow the links below. Start reading along at 10pm (pst) Monday (9/19), and, join me back here later that night for a Midnight Rambling on what Sam was thinking right about that time. Then, over the next few weeks, check back here, on Facebook, and on Twitter for more insight, stories behind the story, and teasers from book three, Of Sovereigns and Shadows!


Thank you so much for visiting! I hope you're having a beautiful day, night, or sometime in the between....
Roari
Posted by Roari at 4:32 PM