Ten years ago, right about now....

In real life, ten years ago, I was a busy mom of a fifteen month old, a restaurant manager, and scribbling away what words I could between diaper changes, feedings and shifts at work. The first story sparks for the Society in the Shadow of Civilization wouldn't come to me for a few more years. But is the tenth anniversary of where that story begins. Or, Sam's telling of it, anyway.

Ten years ago, right around this time, Samantha Marquet would be finishing up writing an assignment from one of her clients before heading out to run some errands. It wasn't a great day, getting a rejection email from a magazine first thing in the morning and dealing with a rude client later, she was in a pretty bad mood. Until her visit with Mr. Zhou at the bookstore. From there, it just got weird.... 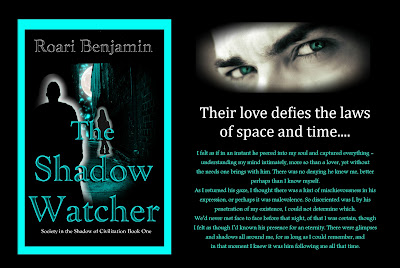 And, it will only get weirder in the days and weeks that follow! If you don't have your copy of The Shadow Watcher yet, get it free now, and join me in retracing Sam's journey, ten years later!

Check back later tonight for a Midnight Rambling on what was Sam thinking!?!?!?

As always, thanks for stopping by! Hope you're having a beautiful day, night, or sometime in the between....
Roari
Posted by Roari at 4:30 PM