Behind the Society: The Characters Less Mentioned

For Part Three of my little Escape Day Celebration, I'm sharing a little more about the Characters we meet in Fore Shadows: Escape 2169....

Samuel Marks escaped the Future with the help of two strangers (who should be familiar to readers of The Shadow Watcher), taking six others with him to 1513, where they founded the Society in the Shadow of Civilization. But, they left the strangers, and Samuel's father, Nathaniel, behind. 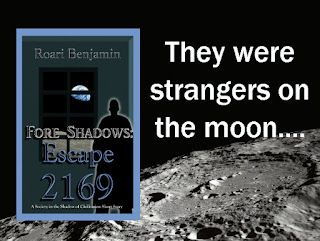 Now, the strangers came prepared with their own mode of escape, don't worry. Though she is wounded, badly. Will the fruit of the Flamella tree be enough to save her? Or, is that the end of her story?

And what becomes of Nathaniel? Well, we must assume he's alive and well. Well enough, at least, to repair the Time Travel Apparatus, and send all of those Travelers back to mess with Sam and the rest of the Society, right? But, what does the U.C.E. have to do to coerce him into compliance? And, how long did it take? That question will be answered in due time....

Now, Eleanor, Tollack and Vega are the only founding members of the Society Sam has met so far. So, what became of Marcus, Pose and Voorhia?

Marcus is known in The Shadow Watcher as "the Defector," and is behind the scenes (for now) working with other "rogue" members of the Society. Sam will cross paths with him for the first time (or is it?) in Book Three.

Pose is named after a certain Greek god, whose name also appears in The Shadow Watcher. Otherwise, we know nothing more about the Man of Twelve Tongues. We can presume he's still alive up until around the time of Daniel's (Sam's father's) accident, but what became of him? Is he still out there, and, if so, is he friend or foe?

And, Voorhia. Brilliant, love-struck Voorhia. Where is she? After convincing the others to bring Vega along, you'd think she'd be right at his side when he introduces himself to Sam. Right? ??? But, she isn't, and is not mentioned at all. So, did she make it to the Arrival in 1513? Or, did something else happen along the way?

I can't help myself. I promised secrets. So here you go.....

Yes and Yes. Pose and Voorhia are alive, and no, they're not together. And, yes, Voorhia and Vega have a very strong connection to another Less Mentioned Character in both The Shadow Watcher and A Shadow in Doubt.  And, yes, all of them have much more important roles yet to play....

That's it! Sorry! I can't say too much else without giving too much away!

Thank you so much for stopping by, and reading along today! I hope you're having a beautiful day, night or sometime in the between....
Roari
Posted by Roari at 7:02 PM