By the fourth day Sam's head was probably spinning out of control. Wouldn't yours? To go from this feeling of being watched for so long, to meeting your Watcher, to being attacked in just over 48 hours?


At least she figured out her mysterious Shadow Watcher is friend, not foe. Though, she still doesn't understand who he's protecting her from, or why.

Oh, but the next day she had distractions. Okay, really just one - Bailey - but, he gave her multiple distractions! How they spent the day and evening after their visit from Tim, aka Detective Ramirez, is entirely up to your imagination.... 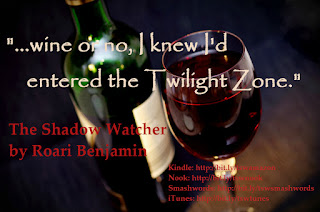 Yesterday (9/23) was a big day - big enough for two chapters! The best part, in my unbiased (wink) opinion, is you finally met Jay. They've known each other for almost as long as they can remember, and can finish each other's sentences. There are no secrets between them. At least, not until now. Though, it's not so much a secret as an omission of one tiny detail. And, something tells me Jay will know about it soon enough.

Now, if you're still up, and have read into Chapter 7 (9/24), you're finally getting some answers along with Sam - starting with The Shadow Watcher's first name. (He does have one!) He has much other, more important information to share with her, and he's running out of time faster than he expected.

Don't stop there, today is the biggest day yet! (Five chapters?!?!?!) So much happens, starting with Sam's "Wake Up Call" (Chapter 8) all the way through "Confessions" (Chapter 11), Sam can only believe it because she's living it.

With that, I leave you for the night, Watchers - I'll be back this afternoon. Until then, happy reading!