The Christmas Parade was last night, and I missed it! It's not always easy to get down there for these things, especially when I make so many other trips down for family events during the holidays. Hopefully we'll make it next year.
Novica is based on my hometown. It's not an exact replica, though one commonality is the annual Christmas Parade, traditionally held the first Saturday of December. And, because Sam loves her hometown as much I do, and the timing was right, the parade made its way into A Shadow in Doubt. Since I missed out on the festivities this year, I decided I'd share Sam's version of the '06 parade with you....

Jim and John were already setting up along the parade route when Jay and I arrived. They had a great spot, on the judges’ side, about twenty feet down the route from their stand. 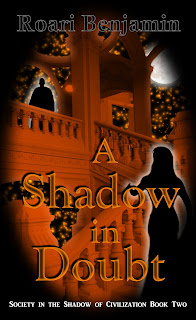 To find out what the BOAs are plotting, and where Sam turns up next, you'll have to read on ;)

Thank you for stopping by! I hope you're having a beautiful holiday season....
Roari
Posted by Roari at 7:04 PM