Wrapping up 2015 with a Few of My Favorite Things 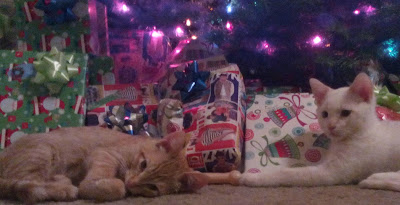 One the many things my best friend (henceforth to be known as M) and I share is an unhealthy attachment to cats. M's cat, Michonne, had kittens in November, so she had the opportunity for these adorable Christmas kitty pics! (We might have to use them for Christmas cards next year!) 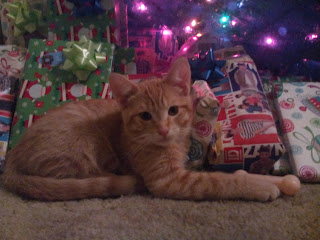 Seriously. This little guy is just too much. He's the mama's boy, and M suspects this is because he looks like the presumed sire. She doesn't think Michonne knows the other two exist! I'm told Feather, M's older cat, does most of the mothering, despite never having a litter. They're lucky to have her around!

Kittens at Christmas are the best, and I'm jealous just the teensiest bit. Then, I remember what it was like having two kittens around, and it passes. But, there's something about having cats, of any age. around during the holidays. For me, Christmas wouldn't be complete without a furball cozied up by the tree. Luckily, I have a few of my own....

Mufasa (right) and Simba (left) helped me wrap gifts last December, but I didn't have enough time to let them join in the fun this year. They're "adults" now, but they still had fun playing with the kid's new toys - like the Cleverkeet here. They really didn't know what to make of it! I'll have to record Simba trying to box with RC Olaf, or chasing the Millenium Falcon soon. Mufasa watches those antics from a safe distance....

Artemis has been hiding out for the holidays - she prefers a quiet house - so no new pictures. Her holiday begins when the kids go back to school! It's okay, Simba stirs up three cats worth of trouble all by himself, so it all balances out.

This will likely be my last post of 2015, unless I squeeze in a Midnight Ramble tonight. Looking back, I didn't accomplish as much as I wanted to, but, life gets in the way sometimes. And, sometimes I have to let it.

I managed to get A Shadow in Doubt out in ebook and won my third NaNoWriMo in a row, so I made some progress. I'm diving back into the story I wrote for NaNo 2014 in January, so you can expect to see some posts about nightmares, elves, Norse Mythology and the like. If all goes well, we'll be moving on to aliens, the subject of my NaNo 2015 project, by summer. Somewhere in there I'll be releasing The Shadow Watcher and A Shadow in Doubt in print....

I want to thank you for stopping by and reading along with my rambles this year! (Extra thank yous if you read one of my books!) I truly appreciate every like, favorite, +1, share and comment across the internet - every little bit helps me connect with new readers, and inspires me to continue. So, once again, Thank You!

I hope you're having a beautiful day, night, or some time in the the between, and wish you a wonderful New Year full of joy, and hopefully a little adventure!
~Roari
Posted by Roari at 7:14 PM