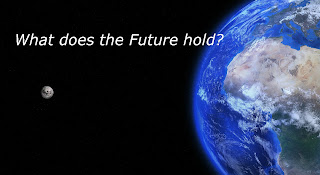 In honor of Escape Day, today I'm sharing some insight into the Future Dr. Samuel Marks and his fellow travelers left behind. The events we've seen happening in the world today, and over the last fifteen years (probably even longer, really) are the foundation for the Future as I've imagined in the Society in the Shadow of Civilization stories. I see it as neither dystopian or utopian, maybe because it's a future not too far away. Though, in a way. it's on the verge of becoming either in 2169.

I'll start at the surface. For one, a map of the Earth would look very different from those we see today, as current climate studies suggest. Polar ice caps have melted, the sea levels have risen, but I've added massive structures - cities raised in the sky, but not floating like on Bespin - which host half of the world's population. Antarctica, boasts a thriving population of surface dwellers, who, like those in other still habitable areas, have adapted to a warmer, tropical environment despite frequent destructive storms, and excessive levels of chemical contamination.

As the climate was changing between now and then, and the first sky cities are being planned, tensions in the global society continue to boil over, erupting into a series of small wars over the next few decades, leading to the War to End Conflict in the latter part of the twenty-first century. 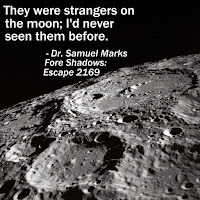 The result is the formation of The United Continents of Earth, a "democratic" body governing eight continents, including a man-made land mass in the South Pacific (which is the poorest, and only continent without any sky cities.), as well as colonies on the Moon and Mars. Both colonies and the nations within each continent are responsible for electing their representatives, who, in turn, elect a representative to the U.C.E. council. But, by the mid 2100s, many of the positions held become more like titles passed from generation to generation of the same families.

Science and education become prevalent over religion, a necessary shift in a world threatening to wipe out entire populations by famine, disease or storm on a daily basis. And, this is where the people essentially lose their freedom. Testing begins at any early age in the sky cities, and children are directed in their learning at every step of their development toward certain goals. Sometimes the U.C.E.'s objectives are in line with the students passions, but. as in Samuel's case, often people are placed where the U.C.E. thinks they will be most effective, and not in an occupation where they are free to pursue their interests.

But, as we know, Samuel didn't let his placement stand in his way....

I hope you enjoyed this little glimpse of the Future, and will be back for more later! Thank you for stopping by!
Roari
Posted by Roari at 2:17 PM