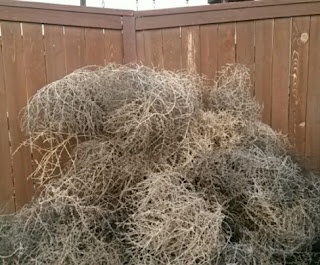 It's been quiet in my little corner of the webiverse lately. Okay, more like silent. Except for the choir of crickets singing. Do you hear them? Oh, and the wind from this last storm system howling like a rabid pack of wolves for the last three days - that was exciting.

Snow blew in with the pack for about forty-five minutes Sunday. It wasn't cold enough to stick, but just enough to run around in and have fun with the kids. It also brought a mountain of tumbleweeds to our backyard, which was not as much fun. (Picture this multiplied by ten.)


I've been anti-social on social media most of 2016 thus far - but don't think I don't miss you! Keeping my little procrastinators on track at school, cleaning up the yard (again), trying to sell a car, attempting pre-spring cleaning, attending birthday parties for little ones belonging to dear friends, preparing to file taxes and exploring new work opportunities has kept me busier than usual, and made my brain too tired to tweet. Now that the storm is over, and it's February, I figured I should take a page from the groundhog's book, and say hello.

Speaking of pages... I've also been reading some lovely Norse mythology and folklore, more specifically pertaining to the Black Forest region, while taking notes to straighten out the supporting mythology in what I'm still referring to as Minna's Dream. It's a YA Fantasy novel, involving nasty elves known as Alps, who are responsible for causing Alptraum - or, nightmares. (I'll eventually come up with a real title.) I did some research while writing the first draft for NaNo2014, and a little more since, but still need to dig deeper.

Throughout Minna's childhood, her grandfather warded off her Alptraum by reciting tales of the great warriors of light, who waged war to protect mankind from darkness, as though they were nothing more than stories. Myths. Legends. He never led her to believe they were first-hand accounts, though many of them were. Later, as he struggles with Alzheimer's disease, she doesn't understand when he tries to explain what is coming.

His death came as a heavy blow to Minna, who loved "Opa" dearly. She promised him she would remember the stories he told, and keep his treasures safe - including a faded, tattered, ugly green felt hat, hidden in a secret compartment in the bottom of a chest carved from an oak cut down in the Black Forest. She doesn't understand why he was so fixated on the hat, or the stories she could recite from memory, but honors Opa's wishes, and keeps it safely tucked away. Until her Alptraum returns.

Since Minna's story is set in a fictional Southern California suburb, I thought it would be appropriate for earthquakes to play a role in unleashing the evil elves upon unsuspecting teens across the valley when I wrote the original draft. Now, I think I've finally found something I can work with, but, it involves more of the hierarchy of Norse mythology and will probably launch the story into another book, which wasn't my intention. So I may cut the earthquakes out altogether. Decisions, decisions. But, first, more reading for me!

Do you have a favorite source for Norse mythology or German folklore? I'm looking for more to read, so, please, share away in the comments below!

I hope you're having a beautiful day, night, or sometime in the between....
Roari