Fore Shadows: Escape 2169 was public on Writing.com first. (Most of what I write starts there.) Over the years, I've had all sorts of feedback on my writing - good, bad, soul-crushing - but, I think my favorite comment on any of my work, to date, was simply "I love Tollack!" I knew I'd accomplished my task.

See, when Sam first learns of the Society in the Shadow of Civilization in The Shadow Watcher, Tollack Pennington isn't so lovable. Having put himself in control of the world her grandfather founded, Tollack is less than thrilled to see Sam show up, because, as Samuel's heir, she could challenge his position. And she does.

What Sam doesn't know is the complex, centuries-old history between Tollack and her family. As her grandfather's best friend, Tollack was more than just one of the founding members of the Society - he was Samuel's most trusted confidant. But the Elder Sam meets is a bitter, jealous, power thirsty dictator. So, how did he go from Earth vacation fishing buddy to nemesis? Yes, it has something to do with a woman ... or two. At least, that's part of it....

Long before the Society, well, thirty-two years before, Tollack and Samuel were born on the Moon - in the Colony's medical facility, of course - and they grew up close friends. By 2169, Tollack was a lead technician in the medical laboratory. It was he who enlisted Marcus and Voorhia to help Samuel save their fellow colonists from the epidemic threatening them all. 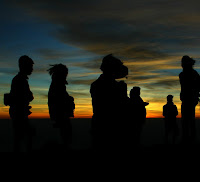 Upon their Arrival in 1513, Tollack is the first to defend Samuel when others would challenge his decisions. He was the one who urged Samuel to assume the title of Sovereign of Time, offering his loyalty and uncensored council. Eventually, though, Tollack grew to resent his friend.

Marion explains some of it to Sam in A Shadow in Doubt. But, even she doesn't know the full story. The trouble between Samuel and Tollack began a full century before she was born. It began with Vivienne - Samuel's wife.

So, in writing Escape 2169, one of my goals was to show another side of Tollack. Before he went to the dark side. Don't get me wrong, it's not like he was ever a Prince Charming. He's actually more of an ass, in my opinion. Just in a lovable sort of way. And he continues as such right up until Samuel breaks his own rules, and uses the Philosopher's Stone to save a young woman, who historically died, unwed and childless, at age 22.

By the time Tollack uncovers his friend's secret, Vivienne is tucked away in a cabin, hidden from the Society, expecting Samuel's son. For the first time, Tollack feels as though his friend has forced him into a position he cannot escape from.

The two men reconcile after Daniel is born. Samuel asks Tollack to be the boy's Godfather. For a time, it seems as if all is forgiven. Eventually, though, Tollack becomes resentful of his friend again, and later his own Godson, yearning for a family of his own. He does something no one knows about. I mean NO ONE. In centuries, he's never breathed a word. But, when the time is right, the truth will come out, and the results will undoubtedly be unexpected.

Fore Shadows: Arrival 1513 is the next planned installment in the Society in the Shadow of Civilization series, where you'll have another opportunity to get to know the founding members of the Society. Check back for an updated "Arrival" time!

I hope you're having a beautiful day, night, or sometime in the between....
Roari