Isiterra - The Tale of the Orbs 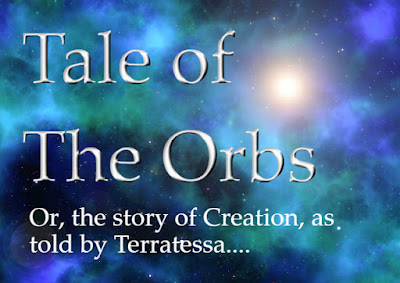 This version is transcribed from one of three known copies of "The Origins and Histories of Isiterra" written by Terrano, found in the antiquities vault at the Iselos Learning Hall.


The Tale of the Orbs

(Also known as The Story of Creation, as told by Terratessa to the Siyens)

Scattered wide across the vast darkness were millions of great Masses of Light, and though their numbers were great, they were insignificant in comparison to the void that surrounded them.  The light and energy that each emitted so powerfully held them at a great distance from each other, such that each one from another only appeared as a small point of light.

These Masses of Light had their own consciousness amidst the minerals, gasses and flames that made up their being, and the part of each of them that was sentient was aware of the other masses, and longed to make a connection with them.  This was impossible though, because of the forces that held them apart.

Many of the Masses learned to focus their consciousness to harness the energy of their being.  With that power they could control the level of the flames they emitted, thus making themselves shine brighter, or go dim.  They were also able to eject smaller masses of mineral from their core, which would launch into the void in the direction of other Masses of Light.  After hundreds of years, the first mass of mineral reached a Mass of Light from which it did not originate.  It was drawn in by the force caused by the spinning of the larger mass.  When the foreign minerals mixed with the gases and minerals of the larger mass, there was an amazing occurrence; the first Orb of Light was born.

As the first Orb of Light was born, so were hundreds of thousands of others spread far across the vast darkness.  Each one a different size and in many arrays of brilliant color - as a result of the different combinations of minerals and gases.  The advantage of the Orbs had over the Masses was that they were able to propel themselves across the vast darkness, thus having freedom that the masses could never obtain.  Soon there were billions of orbs traveling through the void, and though they were many they still could not come close to filling it.

The masses ceased to produce the orbs after several thousand years, because they found that they only had so many resources to rely on, and many orbs (having also discovered that they had limited resources) eventually settled into a pattern of circulation around one of their parental masses, or a larger orb so that they were no longer lonely in the darkness.
***


Eventually there were but five orbs of light left roaming the darkness, and one by one their paths crossed until they all traveled together.  They each came from far distant places in the darkness, and each possessed different properties inherited from their parental masses.  Iseles was a light blue, Iada pale rose, Iridius shone bright white, Ilias a soft green and Idiles glimmered in lavender.  The true nature of their powers would not be known until much later.

Unknown to these five, there was a sixth orb that was no longer luminescent - Dranscu was much older and had traveled greater distances expending more of its energy - and when it crossed the others' path it chose to follow them.  Dranscu had learned to siphon energy from other orbs to sustain itself, and these five were its last hope for survival.

The orbs learned through their travels that the other orbs who found themselves fading and had settled into orbits around the dead shells of others were able to use the last of their energies in creating life on them.  The five decided that this was a way for them to achieve immortality, and set out to find the perfect shell to create their world.


They came upon the remains of Isiterra - Iridius read its name from its residual energy - and the five together poured their energy into creating a living world upon it.  They took ideas from other creations seen across their travels - changing the round, smooth surface to form high peaks they covered with lush greenery and deep valleys they filled with water.  When their world had taken its shape, they pooled their energy together once more into one final creation.

They cut her from the stone on the side of a mountain, for she would need to be strong; and formed her into the image of a human mother they had found on another world created by others (only much larger), for she would need to be nurturing.  They gave her the name Terratessa.  And with their greatest accomplishment fulfilled, the orbs knew they could rest, and save what was left of their energy should it be needed in the future.  They endowed Terratessa with the same properties they each carried, and ejected shards from their bodies upon the face of Isiterra, to stay connected to the world they loved.  They could be used to wake them from their slumber in orbit, should their world ever need them again.

All of this was achieved without the five orbs ever having knowledge that Dranscu had been in their shadow the entire time.  Once they went into their hibernation, Dranscu created a being of his own, Malough, cut from another mountain far from Terratessa's, and formed in the image of a man from the same world as before, giving him only one human trait - greed.
***
This is how Isiterra came to be.  Terratessa and Malough went on to populate it further with creatures of their own making, fashioned from memory imprints the orbs gave them of other worlds they had visited.  These creatures would eventually collide, leading to their creators' discovery of each other.  The opposite natures of their very cores led to an immediate struggle between the Terressan creatures and the Malorians for dominance of Isiterra. A struggle continuing to this day....


Creating a fantasy world includes creating the religions, history, and cultures within - "The Tale of the Orbs" is one of the chapters from which every Terressan child on Isiterra is instructed.  Is it really how their universe came into being?  Maybe yes, maybe no, but it is what the characters within the story believe, and that's all that matters for now 😉

Thank you for taking the time to read! I hope you're having a beautiful day, night or sometime in the between....