An excerpt from The Shadow Watcher - Chapter 7 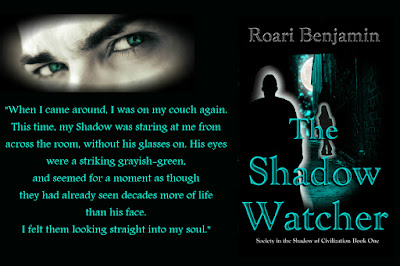 Curious about The Society in the Shadow of Civilization? This week I'm sharing Chapter Seven from The Shadow Watcher ... which is where he finally starts to explain himself.

After Jay left, I went back to work at my computer. I found it hard to concentrate with the doubts about Bailey she’d planted in my head. It wasn’t long before I had another reason to be distracted.
This time, I knew he was watching; I could feel his eyes on me. I rose casually from my seat, and made as though I was heading for the restroom. I turned the corner and flattened myself against the wall. Inching back around to the sliding glass door, I caught a glimpse of him crouched on the balcony.
In one fluid motion, I pushed the door open and stepped through. I caught him off-guard for once, and he hopped back and teetered on his heels for a second. “Why don’t you just come to my front door like a normal person?”
“Because the circumstances of our acquaintance are not normal,” he replied as he stood.
“I see,” I raised an eyebrow at him. “Well, given the circumstances, it's probably best we have this talk indoors.” I stepped back across the threshold, “That is unless you were planning on drugging me and running off again.”
He followed me in, sliding the door shut and locking it, “No, I came back to talk to you, but I didn’t want to interrupt. You haven’t been able to get much work done the last few days.”
“No, I haven’t,” I answered while processing what he’d said. “Wait how….” I thought about it again, “Obviously, because you’re paid to watch me.”
My mounting frustration with lack of information must have been apparent on my face, and he didn’t ignore it. “You’ve been handling this well so far, Samantha.” He took off the sunglasses, and tucked them inside his coat. “It’s time for me to answer some of your questions.”
I decided on the right word for Jayden - striking. In a hot, dreamy way. “How about starting with your name?”
“Michael,” he answered.
I extended my hand, and a jolt of excitement rushed through me when he took it in his strong grasp. “Nice to meet you,” I exhaled.
He smiled, and I probably held his hand a second too long before reluctantly letting go.  Embarrassed, I turned and gestured to the couch. “Shall we sit? Would you like something to drink?”
He sat down, “No, thank you. You might want another glass of wine though.”
I sat down, and started with what was at the top of my mind, “Why don’t you age?”
He knew exactly what I meant. “For the same reason those men are after you. Unfortunately, they think you know things that you don’t know yet.”
“Am I about to find these things out now?” To say that I was anxious would be a gross understatement.
“Some of them,” he leaned back, but maintained a serious expression. “Samantha…”
“Sam, please,” I interrupted. “My father was the only one who really called me Samantha; it makes me feel like a little girl.”
“Sorry, I didn’t mean to-”
“No, please, go on.”
“You know your father was a wealthy man.” I nodded. “His wealth extends far beyond what you know of, and he spent much longer amassing it than you think.” He paused before continuing, “It began with your grandfather in , and your father inherited it when he was killed in .”
My laughter interrupted him, “You meant , right?”
He looked perplexed, “No, I mean one-five-one-three. The sixteenth century.”
“But....” Math was never my favorite subject, but basic subtraction told me the dates didn’t add up. “? That’s ridiculous.”
“Sam, I need you to open your mind,” his voice sounded like it was coming through a tunnel. I was either dreaming or ready for the trip to the loony bin. “What I’m telling you is the truth.”

Thanks for stopping by! What do you think of Michael's Story? (Share your thoughts in the comments below....)

Until next time, I hope you're having a beautiful day, night, or sometime in the between....
Roari

P.S. Links to download The Shadow Watcher, Fore Shadows: Escape 2169, and A Shadow in Doubt are all here.
Posted by Roari at 2:56 PM