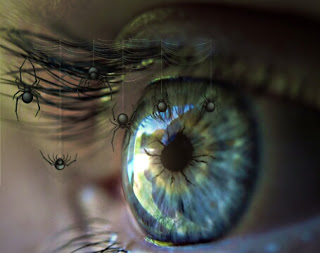 When I was little, I had nightmares. I know, kids have bad dreams, but, these were terrifying. They were REAL.
They were so terrible, I crawled in bed with Mom for years. Dad would wake up in his recliner later, find me on his pillow, and carry me back to bed.

Six dreams recurred for years. I remember them vividly. Mom had to put a shade in my window to keep the neighbor's light out, otherwise it became a lantern carried by (what I suspected was) the Reaper. It worked, most of the time. The others were a little more complicated. 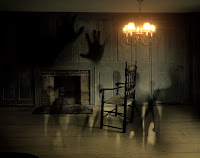 No, I didn't watch Nighmare on Elm Street, Halloween, Friday the 13th, or any horror flicks, really, until the mid 90s. I'm still catching up. My point is, there's NO logical reason for my nightmares to begin with. I was raised in a safe, happy home, surrounded by love. I have no explanation to this day. Except for the ghost; I named him Norman. He occasionally opened and closed my bedroom door, and made things disappear and reappear right where I'd just looked.

Or, aliens. Because, I want to believe. Always have, always will. (January seems so far away....)

When I had to scrap my original idea for NaNoWriMo 2014, I looked to German/Norse mythology for inspiration. I didn't look far before I came across the Alp - a type of elf, and a nasty one. They're believed to cause nightmares, among other things. (The Wiki article here gives a decent introduction.)

I already had a main character in my head, Minna, and some of her friends. When I started reading more on Alps, I found the cause of Minna's nightmares - or alptraum - and the story began to take shape.

Minna is a Junior, and drum major, in high school. She works part time, gets straight As, and thought her nightmares were a thing of the past. Until her grandfather passes away, and slowly they return....

Other kids at school start having nightmares, too. Some start missing classes, one goes on a shoplifting spree, two go missing and yet another has armed himself, and posted various threats on social media.

The war on the town's teenage psyche is all part of the Alp's plot to get back something Minna's grandfather took, many years before she was born.

Maybe I'll start a Pintrest board for this one ... maybe.

I hope you're having a beautiful night, day, or sometime in the between.

Images from Pixabay.
Posted by Roari at 2:08 AM