(This post is part of the A Shadow in Doubt, ten years later, read along...) 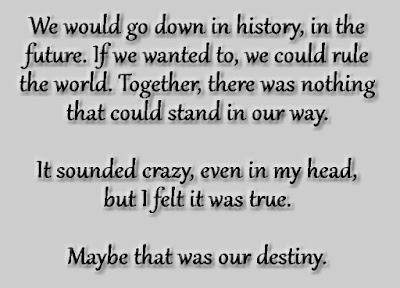 On to day three, and Chapter Four of A Shadow in Doubt....

I posted today's chapter a little while back. (Click here to read it if you haven't yet!) It was an interesting day for Sam, full of pondering.

She knows she has a destiny to fulfill, and books to write. Books still being read almost two centuries later, though some of them have been banned. Though, she has no idea what she could possibly write that would be a threat to the U.C.E., which of her words would inspire those living in a global society, in another lifetime.

She's also torn between not wanting to throw away a potentially perfectly good guy, provided he isn't working with the enemy, and following her heart to Michael, the man who fell in love with her long after she dies and has protected her since birth.

I feel a little bad for putting her in this mess. It sucks. But, if she chooses to look at the glass half full, she has a potential eternity to have it all. The problem is, loyalty is everything to Sam, and right now she feels she's betraying Michael, Bailey and her own heart, all at the same time.

Before she can make any decisions, however, she must return to the Society's complex to deal with Neve's trial, and face Michael again for the first time since breaking his heart....

I hope you're having a beautiful day, night, or sometime in the between. And, happy reading!
Roari