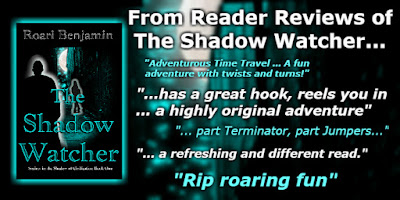 I can't believe we're already at the final chapter. I'd planned a few more posts along the way, but I used the wrong hopper, and got too far ahead ... which brings me to the subject of the post!


When I left off, Sam had lost a day, then three, and then a week all at once. But, what's a week or two when you have a potential eternity? Right? Still, it takes a little getting used to. Then, there's dealing with those who are supposed to be in the dark about the Society. How do you disappear for days, or weeks, with no contact? Reappear with a convincing story - "my mom died." C'mon, who's gonna question that?

Hopping, though not perfected, is a significant advancement over time travel methods used in the Future. The devices used are portable, for one. They're disguised (as fancy, analog watches). And, they go Forward - something the Future isn't yet capable of.

But, what if, in a hop, we miss something wonderful? (Like the Cubs winning the NLDS last night!) This subject will be further explored beginning late in book 3, continuing into book 4 ... for now, it's a novelty Sam and Jay are getting used to.

Now, as I am without a supply of the Essence, I'm in need of sleep! We're coming to the final chapter of The Shadow Watcher tomorrow (ooops, today), with a few weeks before the start of A Shadow in Doubt. But, if you're wondering about the goings on in between - like Marion's "funeral" - check back here ... there will be some never-before-seen "deleted scenes" coming soon!