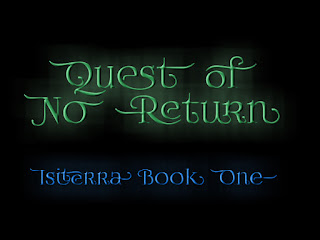 I almost didn't make it here with Chapter Ten this week. Sleep is essential for my brain to piece words together coherently, and I've been having a terrible time falling and staying asleep the last few weeks. So, I hope you can ignore the typos, I will fix them later!

If you're new to Isiterra, you can catch up with all of the chapters here.


******
Aria lay awake with Hunter stretched out along her side. Her mind was too busy making plans for the hunt to let sleep creep in.Though she wasn't keeping track of the time, she did notice the light outside changing colors as twilight drew near. Hunter, you awake? She gave him a gentle nudge.His tail thumped twice on the bed. Is it time to eat?Yeah. If we hurry, we can save the girls the trip up here.I'm waiting on you. He jumped from the bed and sat facing the door while Aria dressed.She pulled on her boots, but didn't lace them up. Do you think I'll need my coat?

I'm planning to wear mine.
"Hunter!" Aria stifled a giggle. "I'm serious."
Bring it. If you decide you don't need it, you have the luxury of taking it off.
"Always so logical," she muttered as she buckled her belt. "Ahna, I forgot to ask if you brought-"
The rest of your knives are with the horses. I'll fetch them while you're eating.
"You have to eat, too."
Yes, but I eat like a dog, so I'll wolf it down.
"Oh ... Hunter," she squished his face in her hands and planted a kiss between his eyes. "You really must stop using the squirrels to test your material."
Hmmph, he snorted. You have your bow? Quiver? Assorted knives?
"Yes, yes, and," she pulled a bag out from under her bed and pulled four knives out. "Yes."
Rope?
"Ah, that's at the stables too. Don't let me forget it." She opened the door for the dog, and locked it behind them.

The Malorian Hunt will commence in Chapter 11 - which I'm going back to right now. If you happen to see my muse, please tell her she needs to report for duty!!

I hope you are safe and well in your corner of the world, we're all still hanging on here in mine. Wishing you a beautiful day, night or some time in the between....