When Time Travelers Bump into Themselves...

I know there's a good deal of debate about whether or not it would be possible, but, in my world, the Society in the Shadow of Civilization, it happens. More than once.

The first instance in the Society in the Shadow of Civilization is in The Shadow Watcher, when Sam and Michael travel to Costa Rica in search of the Flamella tree. They didn't expect to see anyone except Adjatay - but, they see themselves across a ravine... 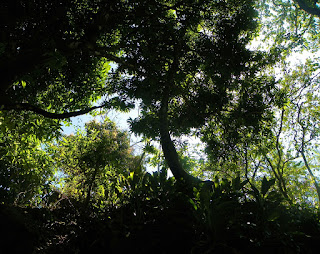 After four hours on foot, my t-shirt was clinging to my skin, soaked through with the dampness in the air and the sweat streaming from every pore on my skin. We came to the edge of a ravine and I looked over my shoulder to see the sun was already beyond the peak of its journey for the day, just beginning its descent toward the other horizon behind us. It was when I turned my head forward again that my eyes caught one of the slanting sunbeams, angled just so, reflecting back at me from some unnatural surface in the jungle.
It was only the briefest of flashes, but it was enough to draw my attention down and to the other side of the ravine about five or six hundred feet ahead. Fixing my gaze on that flash, I saw movement about halfway up the wall, and made out two camouflage-clad figures, which appeared to be a man following a woman up a ladder of vines.
“Michael, look,” I pointed, but he had already seen them. “Why would anyone be out here?”
“Who’s out here is the more important question.”
I fumbled in my pack for my binoculars and raised them to my eyes, but my hands were shaking so badly, all I could make out was her hair was about the same color as mine, cut in one of those short bobs I was afraid I could never pull off. “Here, you take them,” I handed the binoculars to Michael hoping he would have better luck.
He took a moment to get them in focus, and then all the color drained from his face as he lowered them again. He whispered, “What the Hell?” under his breath.
“What?” He didn’t respond, but looked through the lenses again. The woman seemed to be looking directly at me at that moment, and with my sunglasses I just caught a flash of the glowing brand of a Traveler on her forehead. “Do you know them?” I hissed. “Are they assassins?”
“Not unless you’re planning on committing suicide and haven’t told me.” I just looked at him, blinking. He shook his head and passed me a bottle of water. “Even I’m caught off-guard by this one.”
I gulped, realizing the answer before I asked the question. “It’s us, isn’t it?”
He nodded. “Yes. But why? How?”
The Future Us reached the top of the wall, and amalgamated with the forest, disappearing from view. “Guess this kind of blows the theory about not being able to occupy the same time as yourself out of the water, huh?”
His wrinkled brow and accompanying scowl were his response. “We need to hurry, or they might be gone before we get there.”

Scrambling, and mostly falling down into the ravine, we ran along the bottom and then scaled the wall of vines back up the other side. It seemed like we were moving much faster than the other us, I was sure we were gaining on them.
Romeo and Juliet continued to lead, but had been flying just enough ahead all along that I suspected they were guiding the other us as well.
The rush of air that accompanied a Hopper came just moments before we stepped into the clearing. “Dammit,” Michael muttered.
“What?” We didn’t need any surprises now.
“It’s gone.” 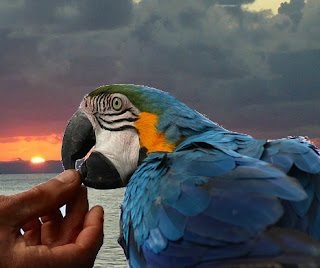 “What? The tree?”
He nodded.
“Maybe it’s just not here yet?” I hoped.
“It was here, Juliet delivered a sample to Zhou overnight.”
I didn’t understand what was happening, “But....”
“We took it.” He meant the other us we saw in the jungle; the us from the future.
“But why?” I was so angry at myself, if I had a gun and the other me was still there, I might’ve shot her. “They should know we needed that tree! Why would I take away my chance at saving Mom and Jay?” I shook my head, “I couldn’t have done this.”


There's another scene, later in the book, which is a bit confusing, but intentionally so, because Sam isn't sure if a visit from her Future Self is a dream or not. Highlight the following text if you want to know the truth.... It isn't a dream! It's her Future Self from a different time than the Future Sam and Future Michael in the jungle. Before or after? We shall see....

Since the Reader is seeing the world through twenty-seven year old Sam's eyes, in 2006, the Reader doesn't know what's going on between Future Sam and Future Michael on the other side, when they come from, or where and when they took the Flamella tree. Only that Future Michael leaves that stupid note for Sam in the present, which Adjatay gives her right after the excerpt above....

But, there is another side.

So, I started re-writing the scene from Future Sam's perspective and outlining how they got there a long time ago. Before writing A Shadow in Doubt. And, when I looked for it a couple of weeks ago, thinking I'd share it here on the blog, I realized it takes on a whole different meaning after reading ASiD. It can be read before or after, but I left a little thread between the two I almost forgot! (The big question should be resolved by the end of Book Three though....)

I need to do some editing this week, but I do plan to share Future Sam's version of the events in Costa Rica with you very soon!

In the meantime, Thank You for stopping by! I hope you're having a beautiful day, night or sometime in the between....
Roari